THE VILLAGE AND ITS INHABITANTS

The Maroon Village Santigron was founded around 1900 by the Sarramacaan Tangiba Kwao, after the abolition of slavery. The Saramaccans  are descendants of the Maroons, runaway slaves used mainly in the second half of the 17th century the forests of Suriname and initially settled in along the Saramacca River.

Santigron is located on the Saramacca River and is mainly populated by Saramaccaners, but also others such as the Maroons Aucaners, Matawai. There are 500 inhabitants of the village. The villagers live mainly by agriculture, hunting, fishing, handicrafts and carvings. Despite the influence and proximity to the city, a large proportion of the inhabitants of Santigron continue their rich tradition from Africa.

This is reflected in traditional dress: a kamisa to the man (a cloth, wrapped sideways around the torso) and Pangi (cloth worn as a skirt) for women. Also in cultural expressions such as Awasa (escape dance), Sonque (fish dance) and Soesa (victory dance) which is accompanied on drums such as the Agida and Apinti. The residents have a great knowledge of medicinal herbs from the jungle. In Santigron traditional places to find are the women’s house, the place of sacrifice (Faka-paw) and the Honor gate (Azam-paw).

The village council of Santigron consists of seven captains, one female and several basjas (assistants of the captains).

You will be picked up at Torarica (8:45) and then depart for Lelydorp with route information and facts about Suriname and its culture. In Lelydorp is a short stop at the market because we will take your fresh fruits and vegetables for your stay with us. Then you leave Lelydorp towards the inland.

When you arrive at our eco park, you get a welcome drink and then you go with our local guide for a walk through the village. The guide knows all about medicinal plants, religion and culture of the village. The village school is on the list. Then you get when you return, and offered a delicious lunch being cooked by our cooks Marron.

Then you can relax for an hour. After relaxing the village children come to you with cultural dances, accompanied by drummers and singers. Then you get a bottle of water and a poncho and walk into our korjaal and go boating and a half hours in the hope to see monkeys, sloths and parrots. If you come back, it’s between half six and half seven and depart to Paramaribo.

no images were found 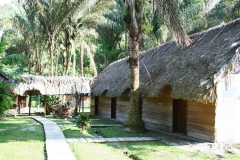 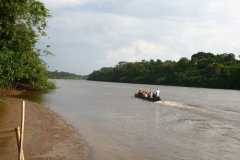 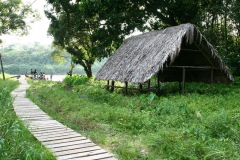 no images were found

Other excursions and tours:

Did you already looked to our other nice excursions? We offer the best excursions and tours for Suriname.